Reuters – The UAE has pledged $2 billion to help develop a series of “food parks” in India to tackle food insecurity in South Asia and the Middle East, a joint statement said on Thursday.

Speaking in Jerusalem at a virtual summit with UAE, Israeli and Indian leaders, US President Joe Biden said the investment could “increase India’s food yields in the region three-fold in just five years”.

The parks would bring farmers, processors and retailers together using advanced climate technology to minimise waste, conserve water and maximise crop yields, focusing at first on crops including potatoes, rice and onions.

The four countries would also advance renewable energy projects in India, including wind and solar energy plants, they said.

The projects would be supported by the Israeli and US private sectors, Biden said at the summit on food security and clean energy amid fears of global food shortages caused by the war in Ukraine.

Russia and Ukraine are the world’s third and fourth largest grain exporters, respectively, while Russia is also a key fuel and fertiliser exporter. 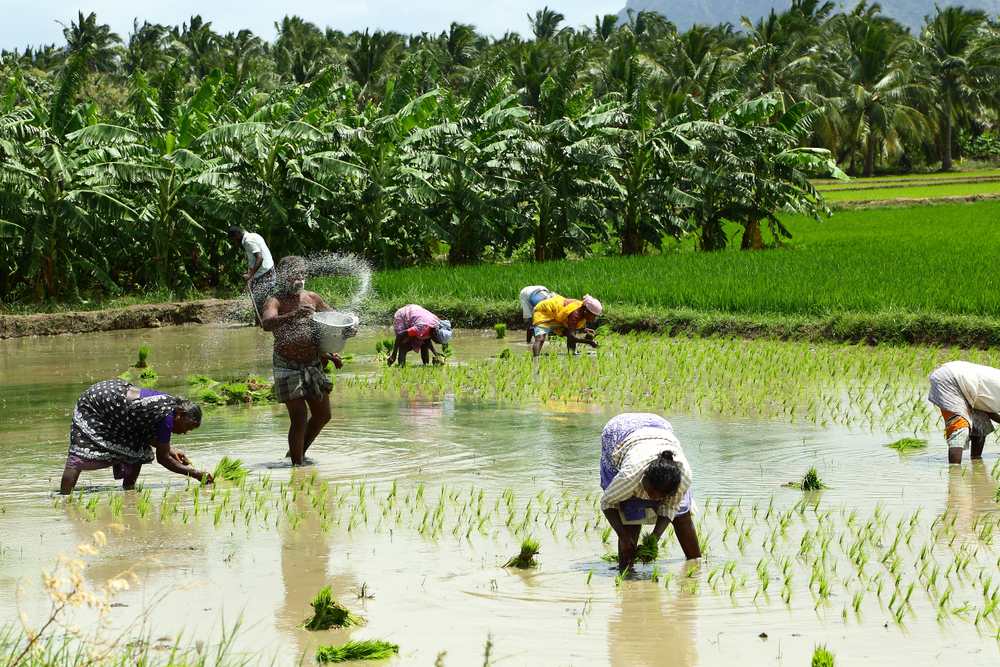 Farmers work at a rice field in Madurai in the Indian southern state of Tamil Nadu. Sam Thomas / Shutterstock

Economic fallout from the pandemic, climate change, food insecurity and volatile energy markets, Biden said, had been “made worse by Russia’s brutal and unprovoked attack” on Ukraine.

“All these issues require cooperation and coordination, and none of us can mount a comprehensive response on our own,” Biden said.

UN agencies warned this month that the war in Ukraine and climate change could push starvation and mass migration to unprecedented levels.

They would also provide India with an opportunity to benchmark its perishable food products for global export and allow Indian produce access to the strategic Gulf markets starting with UAE, Kwatra said.

Gulf Arab states import as much as 80-90% of their food and while their oil wealth renders them less vulnerable to rising global food prices than poorer countries in the region, disruptions threaten their supply chains.

India, the world’s third-biggest oil importer and consumer, depends on Gulf state for meeting most of its oil needs.

Wealthy Gulf states have invested heavily in farmland overseas and have been investing domestically more in agritech, which is also a fast-growing sector in Israel.

Crop yields are relatively low in India, which despite being a major farm goods producer, lacks regular irrigation for around half its farmland. Venture capital firms are increasingly pouring money into local agritech start-ups. 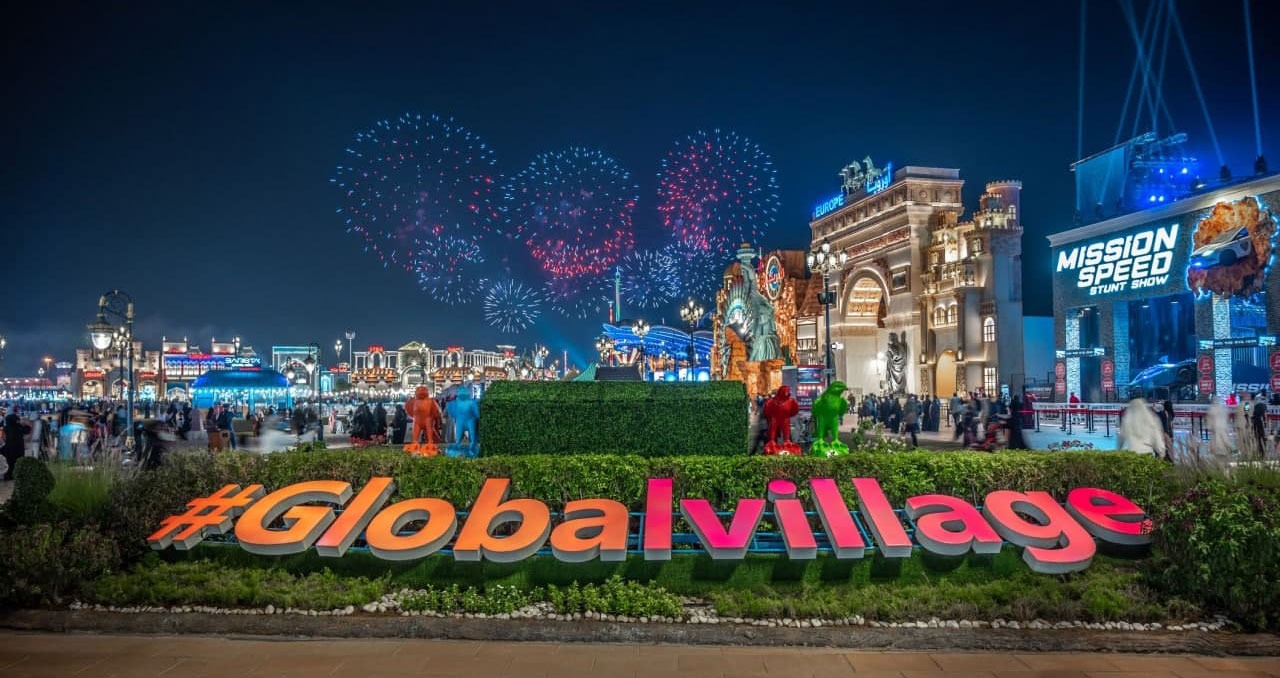 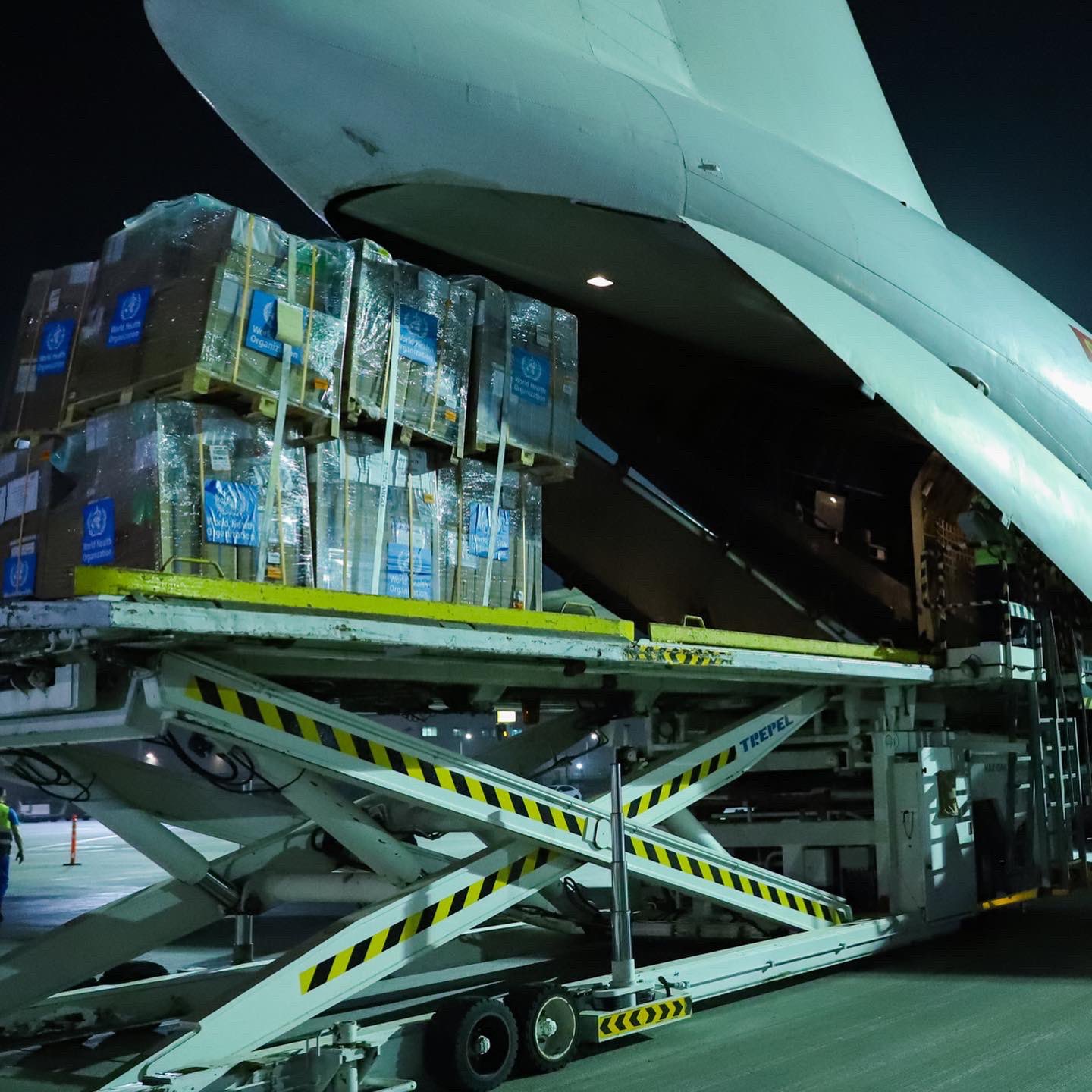 Vice President and Prime Minister of the UAE and Ruler of Dubai, His Highness Sheikh Mohammed bin Rashid Al Maktoum, upon the request of the international humanitarian community and the World Health Organisation (WHO), has ordered the facilitation of emergency aid flights to transport life-saving humanitarian assistance to Kabul, following a 5.9 magnitude earthquake that hit eastern Afghanistan.
On Tuesday 28th of June 2022, a cargo flight departed from Dubai to Kabul, carrying 24.5 metric tons of essential medicines, medical items, and cholera kits supplied by the WHO from its warehouses in the International Humanitarian City (IHC) in Dubai. The facilitation and transport of aid come in response to the immediate humanitarian needs of the landlocked Southern Asian country following the devastating earthquake that claimed the lives of at least 1000 people, amid fears of a cholera outbreak besides the country’s already dire humanitarian situation.

Giuseppe Saba, CEO of IHC, said: “Reports indicate that this is the deadliest earthquake in two decades, further compounding the alarming humanitarian situation in Afghanistan. The IHC, under the directives of His Highness Sheikh Mohammed bin Rashid Al Maktoum, is accelerating the rapid response of the international humanitarian community as it rallies to come to the aid of those impacted by the disaster. Many organizations that we host in IHC are working around the clock to mobilize resources, and we are coordinating with them to provide all the required support to transport relief from our warehouses into Afghanistan. Time is of the essence, and Dubai and the UAE’s leadership consider a swift response a humanitarian duty to save lives.”
Dr. Dapeng Luo, WHO Representative in Afghanistan said: “The trauma and emergency surgery kits that are arriving on this flight from WHO’s logistics hub in Dubai’s International Humanitarian City are absolutely critical to maintain our ongoing support to the people of Afghanistan as these supplies will cover the needs of at least 340,000 people.  We are grateful for the vital logistics assistance provided by the UAE in support of WHO’s global logistics hub in Dubai.” 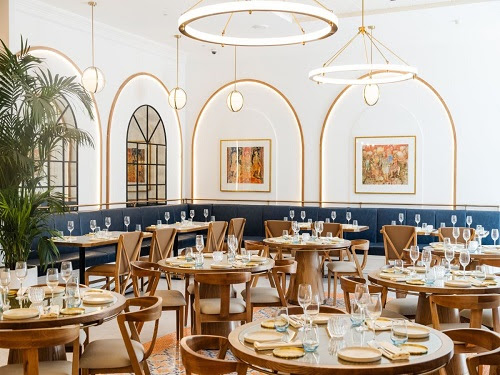 Abu Dhabi, May 27: The Crossing is all set to create waves at the 22nd edition of IIFA to be held at Abu Dhabi’s Yas Island. Launched on January 20, 2022.

With a host of Bollywood filmstars, celebrities and visitors thronging to attend India’s famous award and entertainment show, fine dining will be at its best display at The Crossing.

It is the most sought-after venue for its elevated Indian cuisine and has been chosen for a restaurant takeover as a pop-up for the Indian cuisine-themed Angar from June 2 to 4, 2022, at W Abu Dhabi – Yas Island.

The takeover will give Abu Dhabi residents, celebrities, and tourists a chance to experience The Crossing whose philosophy is rooted in the blending of cultures and shared food experiences in the subcontinent.

The Crossing’s highly researched menu is all about reviving lost recipes, exploring the diversity of regional cuisines, and finding dishes that have been influenced by immigrants and travellers. It features fewer curries but relies more on shared plates that are expressive of the classic Indian comfort food that generations of Indians have grown up with.

For the limited edition restaurant takeover, an exclusive menu has been curated and it includes fragrant Mutton Pulao made with the choicest spices; Walima Korma, a slow-braised meat preparation exclusive to Muslim weddings; Kalimpong Dumplings, a steamy savoury north Bengal dish; creamy, dreamy Chicken Makhani Malai made with tandoori chicken; Dal Moradabad, a simple yet flavourful moong dal with pakwaan crisps and The Crossing’s signature dessert, Malaiyo, an original winter sweet dish made with milk foam and garnished with honey brittle.

To set in the mood for the occasion, this special menu will be complemented with exceptional cocktails designed around Bollywood and IIFA.

Tickets for the IIFA awards can be purchased at platinumlist.net

Speaking of the opportunity, Jarret D’Abreo, managing partner of the restaurant, said, “The Crossing has firmly positioned itself as an elevated Indian restaurant in Dubai, and we are passionate about the experience we offer to our guests. We are delighted to forge this unique partnership with IIFA and W Abu Dhabi to drive our first pop-up to recreate The Crossing experience. We believe that great partnerships are what drive real change, and we aim to offer a world-class dining experience to the global audience in Abu Dhabi.”

Adding further, Andre Timmins, Co-founder, and Director, Wizcraft International Entertainment said, “IIFA is all about journeying the world and creating memorable experiences. This year we are proud to be associating with The Crossing to create a culinary experience of India during the IIFA weekend in Abu Dhabi at the host hotel. It’s going to be an exciting and entertaining time with good food to be enjoyed too thanks to this association.”